If I were popular

A few nights ago, my mother commented how surprised she had been to hear my five-year old daughter say if I were. I'm not sure I've heard it, but I'm not surprised that she would have said it. To my mother it seemed both complex and dated. My manager has also said that teaching TESL over the years there have been fewer and fewer students who say they use this form, and even some who claim never to have heard it.

So, being the empiricist that I am, I went to Mark Davies' Time corpus and had a look. Here's the shocking result.

Now, before anybody eats their shorts, let's think about what could be behind this. Two possibilities immediately present themselves:

We can test 2 through a simple search for pronoun I with the following result:

But there is a third possibility: that both 1 and 2 are true. So, what we really need to do is look for all instances of if I be and see if a pattern emerges. Unfortunately, the software won't automatically make the graphs this time, so I've put the data in Excel. 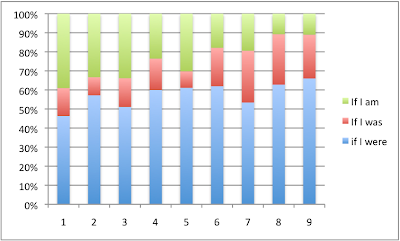 So it appears that there has been a shift away from simple present tense conditionals towards past tense conditionals with if I was picking up most of the change, but with irrealis if I were also picking up a few points. The results are not what I'd expect, but the numbers are remarkably consistent. The last graph shows results for a search of if I [be], where the square brackets return all forms of be.

Ah, evidence speaks, loud and clear! Merriam-Webster's dictionary of English usage (under 'subjunctive') also relates to kids' conversation where 'if I were' was used, noting that it is still going strong 'no matter how many commentators say that it is not as common now as it was a century ago'.