The Extensive Reading Foundation today announced the finalists for the 2012 Language Learner Literature awards. They are reproduced below the jump.

Some of these look well worth adding to the library. In particular, I'd like to check out Arman's Journey by Phillip Prowse and Solo Saxophone by Jeremy Harmer. Why we need yet another graded reader version of Call of the Wild, A Christmas Carol, and The Great Gatsby, though, I'm not sure. Oxford, Penguin, and Heinle all have versions of Call of the Wild, for example, and I'm sure there are other publishers with their own simplifications.

Thneedvillians' Guide to Zen of Pronunciation

If you are reasonably familiar with stuff like martial arts and flower arrangement, you may have heard about the three stages of mastering the art: Follow, Break, and Separate. Yes, it all sounds vague like most eastern ideas tend to do, but it is quite simple, really.

First, try learning what is given to you as it is: obey your master. Only then comes a stage where you realise, 'Hey, but this doesn't quite work with my body/in this context/etc.' - that's when you break the rules your master gave you, to suit your needs.

Then you live a comfortable art life for a long while - until you suddenly look at yourself doing the art from a distant, objective point of view. You are struck by the realisation that it is not you doing the art: you and the art are one, and the one just happens - and it is fun. No particular, prescribed methods need to exist for you or anyone. You are separate from the whole you-art thing, while making it happen by doing whatever is needed. Now that's mastery.

Wow. Do I sound like a Zen monk now?

So, while Brett made a fair point for stage 2 (or even 3?), I think teaching the basic, often exaggerated, pronunciation is the right thing to do for stage 1. This is especially the case with θ/ð because English uses other sounds close to them. I will show you what I mean:

The above is a portion of the IPA chart, where all the humanly possible speech sounds are represented. I have circled the relevant fricatives English adopts. Isn't it insane? English uses eight consecutive humanly possible fricatives! Compare, say, Japanese, where you start with the leftmost ɸ and then swiftly and discreetly jump to s (with a lot less air friction, I might add).

So this is what learners of English face: learn to distinguish between f and θ, between θ and s, and so on, in such cramped space. What little difference there is needs to be duly magnified and presented to them.

In fact, it is not just for learners: English speakers in general do need to do an exaggerated pronunciation of the right kind from time to time. Here is someone making her point (taken from a BBC programme 'Question Time'): 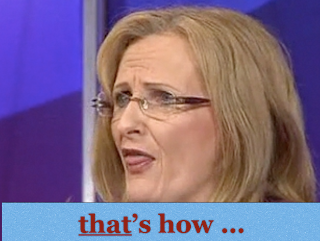 And here is a boy from the film 'The Wall':
I could go on, but I think I have made my point. Finally, though, I do admit that there is such a thing as too much exaggeration. Here is Britney Spears doing an L: 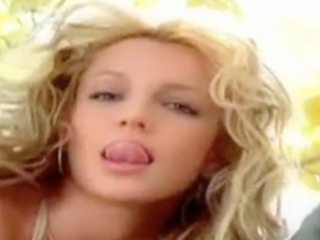 I could think of reasons for doing that, but in general, I will not recommend that. I do show it to my students though, because it's fun. And now I have done it to you. I hope you had as much fun; welcome to stage 3.

For years, my students wrote their assignments on paper with a pen or pencil. These days, I ask that almost everything be submitted electronically. One upshot of this is that I've learned that students either don't know or don't care about spacing around punctuation marks. Many students--typically, they tend to be writers of non-roman scripts--put no space after sentence-final punctuation, commas, semi-colons, or colons. Others put a space before these marks. I've seen open parentheses with a trailing space but no leading space and the mirror image on the other end. When everything was written by hand, these inconsistencies weren't obvious, but now they're stark.

The thing that frustrates me is that use tends to be inconsistent. The same student will write period space here, but space period there. If it were simply transfer from the first language (Japanese and Chinese, for example don't employ spaces), then you'd expect it to be consistent. You'd also think it would be quite easy to overcome, but despite my best efforts, many students continue the behaviour. The message I get is that they simply don't care. While I fight against believing this, it does get disheartening. If they can't even learn to space correctly around punctuation (if I can't even figure out how to get them to do this), then why should I believe it will be different with other aspects of their language?

That's why they call it "krazy"

On this package of "skin guard" instant crazy glue, there is copy explaining that it features "delayed adhesion to skin." The warning, however, states that it "bonds to skin instantly." So, although the adhesion to skin is instant, it is a delayed instant?

When you say "thneed"

Yesterday, we went to see the Lorax. I must say I felt rather conflicted about the plot. A. O. Scott captures what was wrong with the movie well when he writes in the New York Times,


"Despite its soft environmentalist message “The Lorax” is an example of what it pretends to oppose. Its relationship to Dr. Seuss’s book is precisely that of the synthetic trees that line the streets of Thneedville to the organic Truffulas they have displaced. The movie is a noisy, useless piece of junk, reverse-engineered into something resembling popular art in accordance with the reigning imperatives of marketing and brand extension."

Despite watching with unease, I got goosebumps at the end, perhaps best described as plastic goosebumps, leaving me feeling manipulated.

So what does this have to do with English? Not much except that at the beginning, when the townsfolk of Thneedville come out to sing the town anthem, there's a close up of tongues extending well beyond their respective teeth, flapping in the wind as their owners draw out the initial th /θ/ of Thneedville.

Learners of English often have trouble with this sound and are often told to do as the Thneedvillians do, to stick out their tongue. Of course, it is possible to make the /θ/ sound with your tongue stuck out, but that's not how we usually do it, and it's probably not good pronunciation advice.

Speaking of pronunciation, Ron Thomson of Brock U is conducting a survey about teaching it.


"We are seeking participants who are English language teachers, Speech Language Pathologists, or others with a university degree in an unrelated field to complete a survey examining beliefs and practices about second language pronunciation learning and teaching. The survey will require approximately 30 minutes of your time. After completing the survey, you may choose to enter a draw for ONE of FIVE $50 gift cards to Amazon.com To take the survey, click on the following link: http://app.fluidsurveys.com/s/BAS/ or email rthomson@brocku.ca for further information."

The myth of FANBOYS redux

The very first post I ever published on this blog was about the myth of FANBOYS, and it is still the most popular I've ever written. Now an expanded version of this post is available through the TESL Canada Journal.
Posted by Brett at 4:29 PM No comments: