The first time you listen to this video, just listen. Don't look. This is to convince yourself that it really is not English (it is purported to be German, but I can't confirm that), because once you do look, you'll only hear English.

One of the funniest comics around has to be xkcd. Today's comic is titled "Simple" and references the simple English Wikipedia (be sure to mouse over to read the hidden text). I haven't done much editing on simple wikipeia, but I do a lot on simple wiktionary. Drop by and help out sometime.
Posted by Brett at 7:55 PM 1 comment:

Functions in the CGEL

One of the most useful and yet ignored principles in thinking about grammar is the consistent separation of categories and functions. When you can keep them distinct, analysis become much clearer. One grammar that is scrupulous in making the distinction is the Cambridge Grammar of the English Language. It clearly sets out the various categories on pp. 22 & 23, which I've visualized in the first image below. 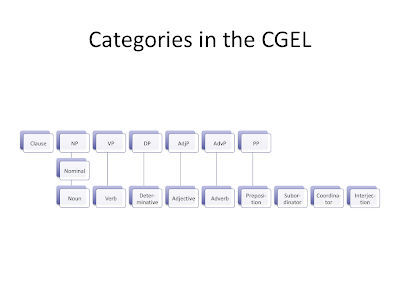 Unfortunately, there's no clear overview of all the functions. I've tried to bring them together in the following graphic. As usual, if you see anything wrong or missing, please let me know. 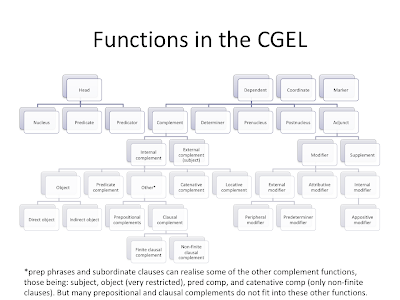 From 1997 until 2003 I worked at Sakuragaoka Girls' Jr & Sr High School in Kita-ku, Tokyo. During the whole time I was there I put my lesson notes and plans online under the title "An EFL Teacher's Notebook". A number of sites still link to it though the server was taken offline years ago. Anyhow, if you're interested in seeing it, the Internet Archive has a copy of it. Probably best to check out the 2003 version.
Posted by Brett at 10:02 PM No comments:

Email ThisBlogThis!Share to TwitterShare to FacebookShare to Pinterest
Another in our irregular series of word lists. Today, all the irregular verbs that occur more than two times in the Corpus of Current American English. I believe that this list is complete, but if I've overlooked something, please let me know. The words are grouped by endings.

Thesaurusi (or how descriptivist can you go?)

Over the past month or so there has been an influx of new editors at the Simple English Wiktionary (and you're more than welcome to join us). One of them saw fit to add an entry for thesaurusi, after all, there was one on the English Wiktionary. I headed over there and sure enough, there it was.

You see how it got there don't you? If you look up thesaurus in a dictionary, it tells you that there are two possible plurals +es or +i. Now if you've never noticed that some English nouns that end in -us form their plurals by dropping the -us and replacing it with -i, it would make sense just to stick an -i on the end and voila!

I referred the obvious mistake for deletion, but lo and behold, thesaurusi is actually out there, and not just in the nescient scribblings of some teenage facebook adict.
A discussion ensued and it was decided to keep it with the following entry:

At the SEWikt, we've put a redirect to thesauri and left it at that. But don't be surprised if one dark night, just when you least expect it, you stumble across alumnusi, stimulusi, fungusi, nucleusi, cactusi or one of their ilk and you find yourself running screaming down the street, your descriptivist sensibilities flapping behind you in tatters.

Recently, I've run into a few situations that have called for some clarification of what it means for a noun to be countable. You may be curious about just where I run into these things. Do people buttonhole me at parties? Grill me at conferences? Stop me on the street? Sadly, no. Most often these issues come up during some sort of net-mediated interactions.

"One of the thrills of creating material for students is discovering new areas of my own lack of knowledge. When designing a worksheet on countable and uncountable terms, my examples didn't really work out right.

I had neatly laid out three zones on the sheet: countable, uncountable and those that can be either (like paper and hair), and assigned examples of each from the students' vocabulary lists.

The nouns 'sheep' and 'fish' are not given 's' or 'es' when applied to plural use (in North American English), so I've simply referred to them as 'uncountable' in the past, and placed them into the uncountable zone. But almost instantly, I realized they didn't fit the patterns I was trying to illustrate.

There might be 'many sheep' in the field, but there darn sure aren't 'very much sheep', to my ear anyhow. There are 'a few fish' in the tank, but not 'a little fish'. These seem to act stubbornly as countable categories.

Which tells me that some noun categories are countable, but their labels (like fish and sheep) just don't get a plural form adjustment.

What are the correct terms and categories for these items? What else am I missing?"

Of course, he's quite right that countability of nouns is best looked at by considering the determiners they will allow rather than their morphology. Nouns like sheep simply have a plural form that is identical in shape to their singular form. These are often referred to as unmarked plurals. An analogy with verbs would be something like put, for which the plain form, plain present tense, past tense, and past participle all share a shape. Most verbs have past tense forms and past participle forms that share a shape (shape here encompasses both spelling and pronunciation).

Another issue is that most nouns have both countable and uncountable senses, though typically one sense dominates. Almost all "uncountable" nouns have a plural sense indicating types (e.g., Belgium produces many fine beers.)

There are few nouns that are singular only. I once believed that equipment was one, but I was mistaken. The following are a few that I can think of, but feel free to prove me wrong:
There are also a few plural only nouns. I think I got these examples from the Cambridge Grammar of the English Language, though I don't honestly recall.
In some language like Chinese, it is my understanding that no basic nouns are countable. All must be identified with a counter (e.g., two cups of water, one rod of pencil, three sheets of cookie).

Finally, it's interesting to note that even among languages that make a countable/uncountable distinction, there is little agreement on what is counted (again, examples may be from the CGEL or perhaps from Pinker's The Stuff of Thought).
Indeed, we can look at almost anything both ways: