Grammar and Beyond, a review 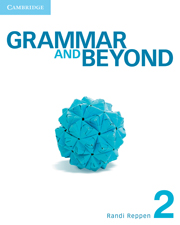 Cambridge has a new grammar series called Grammar and Beyond out/in the works. I got a review copy of the level 2 book by Randi Reppen. I first noticed it at the TESL Ontario conference in October and was interested in it because it's the first grammar series for English language learners I've noticed that employs the concept of determiner (please tell me in the comments if you know of others).

Unfortunately, they make a hash of it.

Let's start with the shocking mismatch between the level of grammar and vocabulary knowledge needed to read and understand the text and the level of knowledge that is being conveyed. Anybody who can understand "singular count nouns always have a determiner before them" (p. 82) already knows as much. There is no point in telling them that they should "not use a or an with plural nouns." The people who need to know this won't even be able to read the chapter with its introductory reading which begins, "identity theft is the act of using someone's personal information without permission." I mean, come on! Permission is ranked as lemma #3,254 in Mark Davies' new Word and Phrase Info corpus interface. The indefinite article is #5. For most language learners, that represents a gap of over a year between when they figured out what a means and what permission means. This problem of explaining English grammar in English to people who don't speak much English is a difficult one, but there is no excuse for completely ignoring the issue.

About five and a half years ago, I started contributing to the Simple English Wiktionary project. I wanted a good collection of definitions and examples for use in EAP classes, and I didn't want to be tiptoeing around copyright issues.

Why would I do this? There are already some great dictionaries for English language learners (ELLs). My favourite is the Longman Dictionary of Contemporary English, but it's covered by copyright. English Wiktionary is also very good, and it's copyright free, but it's generally not appropriate for ELLs. I could have just put together my own materials, but I thought I might as well make my work widely available, since the government pays much of my salary, and I hoped that by doing so I would be able to draw in like minded people and benefit from their contributions.

I won't be out fighting the boxing day crowds today. I saw my family off at the airport. They're already somewhere over Manitoba as I write this and well on their way to Japan. So, now that I'm here at home, I'll sit and do some reading and some blogging, and maybe go in to the gym.

But one this day of sales, I was thinking about vending. I noticed that although the verb vend lives on through its present participle, its other forms are dying. Here's what I mean:

No doubt, vending has been kept on artificial life support by vending machine, which is recorded from 1895, but its other forms are essentially dead. I don't think I've even encountered the word vended; it doesn't show up at all in either the BNC or the COCA. And yet no dictionary I've checked sees fit to point out this morphological lacuna. The blithely list the various forms without comment. Anybody who looks up this word and tries to use, say, the past tense, has been sold a bill of goods by the dictionary. They certainly haven't been vended one.

A noun is said to be number transparent when the verb doesn't agree with it even when it functions as the subject in constructions like, A number of people were there. In this case, the head of the subject is singular number, but nevertheless, were agrees with plural people. What I just realized recently is that there's a big difference between a number and the number. In the COCA, [a number of * are/is] turns up 353 instances of are and only 19 of is, for a ratio of 18.6:1. In contrast, [the number of * are/is] results in only 16 instances of are and  291 of is, for a ratio of 1:18.2, almost exactly inverse.

Other determiners have other patterns. The are to is ratios are:

So, this bothers you, does it?

I thought I was reasonably aware of common linguistic peeves. I generally don't like them because I don't like to dislike things, but I do understand them. Some people don't like 'free gift' as well as 'for free' - I understand. Some detest 'literally' used non-literally - all right, I get it.

But starting a sentence with 'so'? We all do, don't we? Who among us has never uttered 'So how are you?'?

Well, apparently, it is worse than I thought. Or at least it appears to be trendy to detest it - here is an interesting clip from BBC Today. There is also a New York Times article on the subject, reflecting the rise of the usage.

For now my biggest question is, will I now be able to enjoy listening to the immortal piece 'Wish You Were Here' by Pink Floyd (which starts with a double 'so': 'So, so you think you can tell ...') like I have done so many times -  or will this stupid peeve thing somehow ruin the tune?