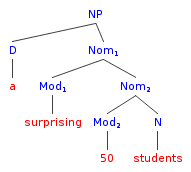 [After reading this post, please see the response by Rodney Huddleston]
Posted by Brett at 6:12 AM

'I now feel that I have a better understanding of the constituent structure, but I still don't know why the nominal requires a determiner. Plural nominals don't, typically, you know.':

Hmmm... well, I can't really explain it, either, but it's worth noting one of the the examples given in the CGEL:

The use of 'another' in 'another three bodies' would seem to imply that 'three bodies', considered as a nominal rather than a noun phrase, is actually singular. This doesn't explain why it takes plural verb agreement, though...

It seems that we've got the paradoxical situation of a singular nominal that's plural in form ('three bodies') inside a plural noun phrase that's singular in form (judging by the choice of 'another' as the determiner).

Brett parses one of his examples as
[ a [ surprising [ fifty students ] ] ]

My naive parsing would be
[ a [ [ surprising fifty ] students ]

Does this bear examination?

John Payne points out the problem with this analysis with the following example: