Listen to this article

The Toronto Star has an article about the retreat of the Canadian eh. It was prompted by a study (summarised here) by Sali Tagliamonte, a sociolinguist at the University of Toronto.

The article compares the frequency of I, and, like and eh in the speech of Torontonians, concluding that eh occurs "only" 519 times "accounting for a piddly 0.02% of the total."

Well, Zipf's law tells us that the percent of the total for any given word drops off very quickly. Let's look at a more meaningful measure. First of all, we should standardise our count. In Tagliamonte's corpus, 519 times is 228 times per million words. Now we can rank that against other counts, such as the frequency of words in the spoken conversation subcorpus of the British National Corpus. Doing so would put eh at the 364th most common word, right between everybody and paper. Not so piddly. On the other hand, eh in the BNC is almost twice as common, occuring 460 times per million words, or ranking 236th, so maybe the unique Canadianess of eh is questionable.

Tagliamonte's research just looks at eh at one point in time, so it's hard to make strong claims about any changes, but in an attempt to get around that problem, she's looked at use at different ages. The following chart is from her site: 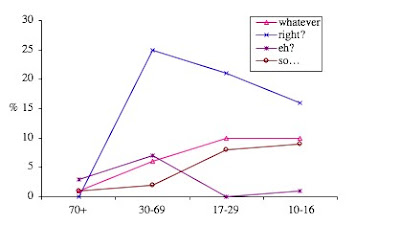 I'm not sure what exactly the left axis is a percent of. Most likely it is a total of all the tags, but unless the age groups sample sizes were balanced, this could be hard to interpret. [April 17th, I now have confirmation that it is total of all tags, and that the sample sizes were balanced.] Whatever it is, it seems that eh is very unpopular among 17-29 year olds. Does that mean that eh is changing over time, or just that people prefer different tags at various stages in their lives?

For more about the meaning eh, see Mark Liberman's post here.
Posted by Brett at 7:27 AM