Over at Language Log, they've taken to calling the restrictive that rule "Fowler's Rule". And from what I recall, Merriam Webster's Usage also attributes this to Fowler (1926).

I was trolling Google books for more on coordinating conjunctions, when I came across Alexander Bain's An English Grammar (published in 1863 by Longman, Green, Longman, Roberts & Green, one of the various incarnations of Longman). A section in the introduction caught my attention (click for larger images):

This is followed up on p. 23 with the following: 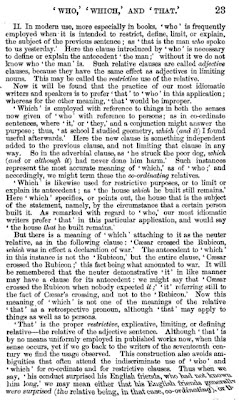 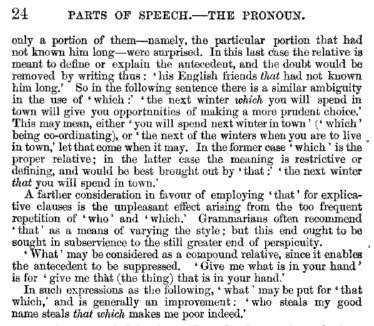 Interestingly, in the examples that Bain supplies to show how which can be ambiguous, he seems to completely overlook the comma, which--at least from this twenty-first-century viewpoint--removes any trace of doubt at all.

So, even if Fowler popularised the rule, Bain claims it as a novelty over 60 years earlier.
Posted by Brett at 6:55 PM