For Better Grammar or for Worse 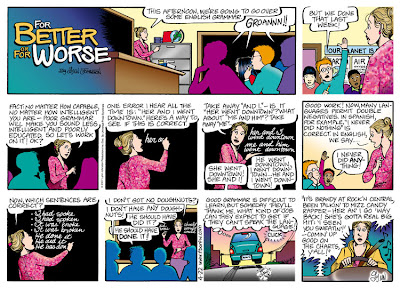 Is "good grammar" really that difficult to learn? I suppose it depends how far your primary dialect diverges from the target dialect. There's probably a Goldilocks distance. If your dialect is already very close, you're less likely to notice any differences. If, on the other hand, it's too far away, then there will be many things to learn.

This is likely to be true in both directions. But it will depend on a certain awareness of your own dialect as being distinct. I've never been able to identify a Canadian merely on their pronunciation of out or about, but I've been tagged as Canadian because of it a goodly number of times--and by people who have far less interest in language than I do.
Posted by Brett at 6:48 AM