Kids have trouble with language too

A recent research paper from StatsCan by Miles Corak shines an interesting light on the general assumption that, although immigrant adults from a non-English/French background will struggle with language when the arrive in Canada, their children will just soak it up like sponges. The abstract says,


"The education outcomes of a cohort of immigrants who arrived in Canada as children were examined using the 2006 Census, and it was found that there may be a distinct pattern in the risk of immigrant children graduating from high school according to age at arrival. The risks of not completing high school do not vary according to age at arrival up to about the age of 9, with children arriving after that age appearing to face a distinct and growing increase in the risk that they will not graduate. Children who migrate may face different challenges in attaining high school credentials, according to their age at immigration, as a result of sensitive periods in the acquisition of a second language or the structure of the education system."

"the risks of not graduating from high school are estimated to be about 15% for boys and 11% for girls who came to the country before 9 years of age. They increase by over 1 percentage point for every year past this age, reaching 20% to 25% for those arriving in the country after the age of 13. These results are robust to controls for the possibility that first exposure to English or French occurred before migration... Second, these patterns may have something to do with the challenges children face in learning a second language, since these challenges vary in a predictable way according to the linguistic distance of the language of the country of origin from English or French."

Looking at the graphs, the inflection points are surprisingly distinct, but they differ for males and females. The x axis is age of arrival. 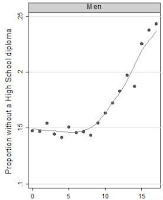 What I find most surprising, though, is that women's chance of completing high school begins to decline with arrival after age 7 where men's chances don't begin to drop until after age 8. Footnote 10, however, points out that a different statistical procedure points to the same inflection point for men, but puts the beginning of the women's drop after age 9.
Posted by Brett at 7:15 AM