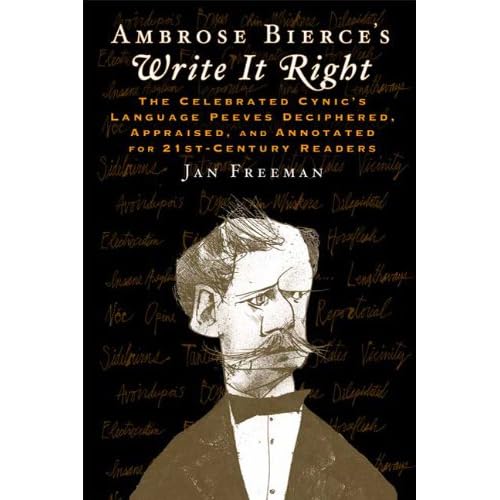 I may be betraying my lack of education, but I'd never heard of Ambrose Bierce before Jan Freeman offered to send me her book, Ambrose Bierce's Write it Right: The Celebrated Cynic's Language Peeves Deciphered, Appraised, and Annotated for 21st-Century Readers. Or at least I thought I hadn't heard of him. Doing some background reading, I found that I'd actually read some of his short stories in high school or perhaps university. It made me feel somewhat better that only one person in the office here had heard of him at all.

Freeman, who writes The word column for the Boston Globe, is one of the most sensible journalists writing about language. Sensible, not as in sensible shoes, but as in a friend who makes sense out of confusion and makes you smile while doing it. Her language change-ometer is sensitive to shifts that I have to dig through corpora to find, and only once they've been pointed out to me.


All of. "He gave all of his property." The words are contradictory: an entire thing cannot be of itself. Omit the preposition.


All of had only recently become a usage issue, and Bierce may have been following Vizetelly 1906, who used the same reasoning to demonstrate that all of was nonsensical: "You may say 'ship some, or any definite number, say ten of them,' or 'ship them all,' but not 'ship all of them.'" That is, you can take "some of them"--some part of a whole--but once you take "all," there's no "them" remaining, and so "of them" is meaningless.


Neither man mentions that Shakespeare, Addison, and Austen used all of, nor that Abraham Lincoln supposedly said you couldn't fool all of the people all of the time. This rule didn't fool any of the people any of the time; everybody went right on writing, "all his property" or "all of his property," as idiom and rhythm demanded. People with nothing better to do may tell you that all of is wordy, but at least these days they won't claim that it's logically impossible.


Mostly Freeman concerns herself with matters of usage. These make me think about the underlying grammar. For example, in the passage above, all is participating in a partitive construction, something most determinatives can do. It differs from NPs such as a kilo in that it requires the before the final noun.
The entry for got married compares it to got dead and suggests simply married as an alternative. Freeman replies that "Bierce pretends to believe that if some past participles pair up with get, all past participles must be allowed to do so." Clearly, though, from a grammatical viewpoint, got dead differs from got married in that dead is an adjective, not a past participle.

I have dipped into the volume and found something to entertain and interest me in every entry I've read, but I'm not sure I'd really want to read the whole thing. The purpose of the endeavour is somewhat lost on me. If it were a contemporary book by an important author, then I'd be behind it. As far as I can tell, though, the original volume has no force today. But then, I didn't even know who Bierce was.
Posted by Brett at 11:10 AM

I have a feeling there are a number of writers and scholars who'd like to do something similar for "Elements of Style." But maybe that's just me.

And of course Bierce's logic is of no help in those situations where the "of" is not just optional but required: all of us, all of them, all of Bierce's books, etc.

He would probably argue that all is redundant in cases such as all of us; omit all! It had never occurred to me that you couldn't say ?all Bierce's books. You can certainly say all his book, but searching the corpora turns up very few instances of all [proper noun]'s, the most common being all God's children. Interesting!