Over at Language Log, Mark Liberman has spent a good deal of time addressing the baseless claims in Louann Brizendine's book and her subsequent media appearances, in particular the idea that women speak more than men do. Today, a paper came out in Science supporting Liberman's arguments that men and women use roughly equal numbers of words. Unfortunately, Brizendine's claims are not dead; they are the undead and will continue to wander stupidly among us leaving ignorance in their wake.

The NYT has a nice graphic showing the distribution. The article it goes with isn't so hot though. 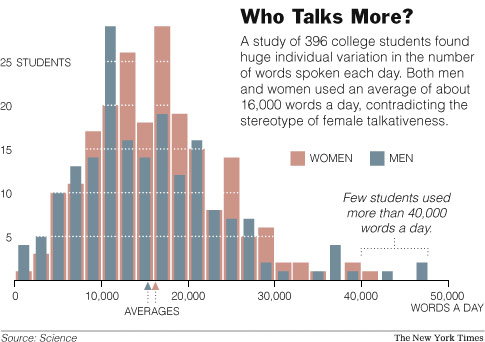 Differences between the sexes aside, the numbers are interesting. In the Mehl et al paper, women and men both spoke about 16,000 words per day. The Longman Grammar of Spoken and Written English though says that "on average speakers produce around 7,000 words per hour in the conversational texts of the LSWE Corpus, or a little under 120 words per minute. Based on this speech rate, a one-million word corpus corresponds to 140-150 hours of conversational interaction." (p. 27) Presumably the Longman folks were only considering the time when people were actively engaged in conversation. Given these numbers, we can extrapolate that your average university student spends just over 2 hours speaking per day and is silent for almost 22 hours. If you allow that most of that speaking is part of a balanced conversation, it would seem that these students spend about 4.5 hours per day involved in conversation.

It would be interesting to know what our total daily word count is, including everything we write, read, hear and speak. [update: July 19, 2007. I've done a quick guesstimate here which suggests an average of about 75,300 words per day (with huge individual and daily variations).]
Posted by Brett at 8:04 AM